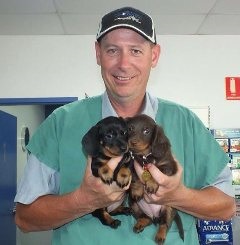 Tony is the proud owner of Naracoorte and Penola Veterinary Centres since he purchased the practice in 2009. He grew up on a station in far western Queensland near Quilpie. He graduated from Queensland University with a Batchelor of Veterinary Science degree in 1990. He spent his first year working in the Kimberley’s of WA then moved to Naracoorte in 1992. He stayed with the practice until 1998 then moved back to the Kimberley’s for 7 years, then back to Naracoorte again in 2005 where he has been since.

He loves his job as a country vet. He has a passion for local community, of helping people and their animals, the privilege of leading a great team of people doing high quality work, the challenge of always trying to improve service and care in a highly variable and changing industry at the same time always trying to provide quality vetcare at an affordable price. He loves that it is never boring. “You can been doing complicated orthopaedics plating a shattered femur together in the morning then pregnancy testing 200 cows out on farm in the afternoon. It’s never boring, and most the people I see I know well and are my friends.” He has developed skills and interest in small animal orthopaedics, large animal medicine and surgery and recently artificial breeding of horses. He currently looks after two dogs, a cat, two chooks and various injured wildlife. 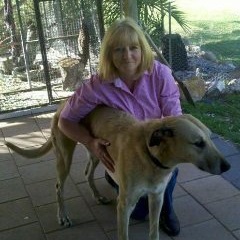 I started working at the Clinic in 1980. I do spend a lot of time with my dogs. Enjoy outdoor activities, gardening, fishing and relaxing. I feel very lucky to work in a great industry where people care very much about animals and their owners. 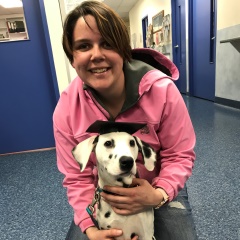 CERT II VETERINARY NURSE + BACHELOR OF ANIMAL SCIENCE
Sharnna grew up in Casterton and moved to Roseworthy after finishing high school to study a Bachelor of Animal Science. She has been working at the Penola Vet Clinic since 2015 and is currently completing her Certificate 4 in Veterinary Nursing. Outside of work, Sharnna enjoys playing netball for the Penola Eagles and spending time with her Dalmation puppy Lexi and cat Cleo.

Larissa grew up in Naracoorte and started working at the Clinic in 2004 as a kennel hand while completing her high school studies. She then moved to Perth in 2007 to study Animal Science at Murdoch University. In 2010 Larissa transferred her studies to Adelaide University where she graduated with a Bachelor of Animal Science. Since then, Larissa has spent time working in livestock health advisory roles around the South East before returning to work as a Veterinary Nurse at the Naracoorte Clinic in 2015. Larissa has 2 dogs at home who keep her busy and spends her free time involved in the Thoroughbred Racing industry.
Larissa completed her training in November 2018 and is the Head Nurse here at Naracoorte and Penola Vet Centres. 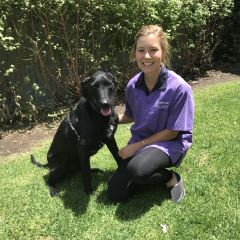 Lauren graduated from Melbourne University in 2012. She moved to Mt Gambier for her first small animal job. After 3 years, she decided to travel and did some locum small animal work in both the Central Coast, NSW and in Canberra. Following this, Lauren returned to Melbourne and worked in a big small animal clinic in Eltham, filling a maternity, year-long position. Once this position was over, Lauren traveled around Europe for 5 wonderful months. On her way home she spent a month in India, obtaining her yoga teacher training certificate.   After satisfying the travel bug (for a while), Lauren has decided to return to and work part-time as a small animal vet for the Naracoorte and Penola Veterinary Centres.  Lauren is mum to her big baby Hamish, the Greyhound x Labrador x Wolfhound x more and her cheeky bunny, Chickpea. 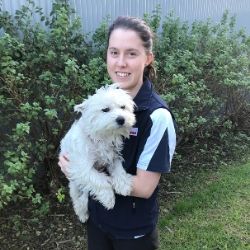 Terri started working part time at the Naracoorte Clinic in May 2017. She has previously worked as a Vet Nurse in Adelaide for 4years, but has since moved back home to Bordertown. She has completed her Certificate IV in Vet Nursing, as well as Certificate III in Companion Animal Services and Certificate II in Animal Studies. While living in Adelaide she has also worked in a pet supplies store and as a dog handler at a dog day-care facility.
Terri enjoys all aspects of her job, from surgical nursing, medical nursing to reception, however isn’t keen on the ‘largies.’ She is always taking home the little ‘orphans’ that need extra love and care.
Terri has too many pets at home to name, but they include: dogs, cats, green tree frogs, fish & pet sheep. 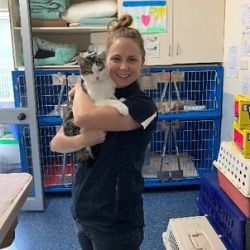 I have been a Veterinary Technician for over 15 years.
After graduating from the University of Queensland with a Degree in Animal Science Specialising in Veterinary Technology, I began my nursing career in a small animal clinic in Mackay, QLD. After deciding to move to Brisbane in 2006, I began working in a solely Equine Referral Hospital where I stayed for about 8 years before deciding to move into an Emergency and Intensive Care role at The University of QLD’s Teaching Hospital, Gatton and at the Animal Emergency Service, Brisbane where I was an Intensive Care Nurse in the hospitals dedicated Pet Intensive Care Unit. It was here that I really developed an interest for emergency and critical care nursing and also further developed a love for anaesthetics and pain management.
In 2015 I decided to start traveling Australia whilst locum nursing and playing polocrosse and in November 2016, I started working at NPVC. My husband and I now permanently live in the Naracoorte area. We currently have 2 horses and 2 cats but I plan to collect all the cats I can. 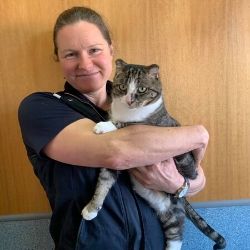 Ellena graduated from University Of Queensland in 2001 and moved to the South East to immerse herself in the diverse experience of mixed practice. Over the years she has ventured out of the South East to view the grass on the other side of the fence as a locum, including back home in East Gippsland, to her dairy farm beginnings. Ellena has studied further in Equine Dentistry, and in 2016 completed the Sydney University CVE Sonology course. She lives on a Prime Lamb producing property in Lochaber, with her partner Justin and their two children. Justin keeps her busy looking after sheep and caring for his polocrosse horses and working dogs, their children keep her just plain busy. Ellena has swapped her bike in the past few years and is trying to learn how to play polocrosse. 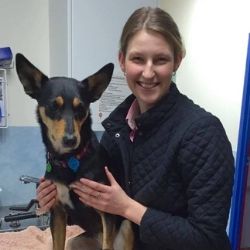 I have over 10 years of veterinary nursing experience. My roles within veterinary nursing have varied from locuming and shelter work to leadership roles. I always strive to provide the best level of nursing care, and aim to treat your pet with the same care and attention that I give to my own.
Out of work my time is spent with my own dogs and horses and any other animals that come in to my care.

I started working with our practice in 2007 and have worked at both the Naracoorte & Penola clinics at different times over the years. I have experience in customer service roles, animal charity work and veterinary nursing.
I enjoy caring for our clients and patients and have a soft spot for senior dogs and cats. Despite growing up in Queensland, I prefer the cooler weather of my hometown of Millicent. I am a mum to Beau, my sweet Kelpie X Alaska and my very vocal cat Sweep. I enjoy live music, watching documentaries and everything Christmas.

My love for animals lead me to vet nursing. My career started in Sydney in 2008. Qualifying in early 2010 I working in a busy small animal practice for 5 years. After a few years off to focus on external study & travel, I have now re-joined the vet community. Starting at NPVC late 2018, I am loving the diversity that the clinic offers in both large and small animal practice, especially horses.
I now call Naracoorte home and since moving here in 2016 I have adopted a Border Collie X Kelpie; Kip, hand raised kitten; Pinot (adopted from the clinic!) and is mother to a rescue cat/travel companion; Mr Hinkley, all the way from Sydney

I began working as a veterinary nurse shortly after finishing high school. I did on the job training to gain my qualification as a level 4 veterinary nurse through TAFE. After 10 years of nursing I gave up my full time position to have my first child with my husband Roger. We now have 3 children, and I am very fortunate to have understanding bosses and have been able to return to work on a casual basis one day a week. I love the variety that comes with my job, working with animals and a fabulous team of people makes going to work very easy!
My family and I live on a farm so we are constantly surrounded by a menagerie of animals, dogs, horses, cats, guinea pigs, chooks and in the winter months a poddy lamb or 10! I love life on the farm and spending time with my family and 2 pet dogs Sam and Dusty.